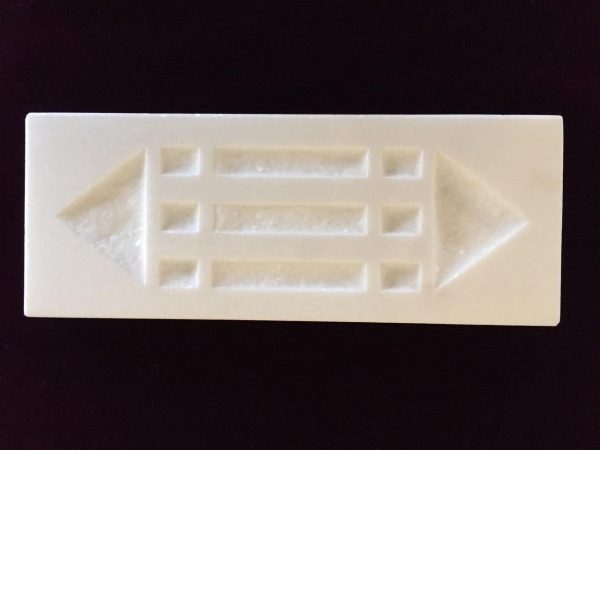 Protects homes/buildings against EMFs, geopathic stress and other kinds of negative/detrimental energies.

This Atlantis Neutraliser is made of marble with the Atlantis symbol carved into it. It disperses harmful radiation within an 7-8 m in radius which is approx 154 sqm (translates to around 1658 sq feet). It neutralises or lowers the effect of harmful radiation given off by electrical equipment, geopathic stress, harmful earth grid lines, etc. It also strengthens the auric field against unwanted thought forms.

On a ten-degree biotronic scale, radiation greater than 6% is considered harmful. The Atlantis Radiation Neutraliser drops the level of radiation to 1%, regardless of how high it was before. (The biotronic scale is a scale used to measure radiation given off by underground water.) Users of the Atlantis Neutraliser say that they generally feel better once the Neutraliser has been placed in their environments. It can help to ease chronic fatigue, hypersensitivity, headaches, back pain, insomnia and much more.

The Atlantis Neutraliser is portable and starts to work as soon as it is placed in a space with the symbol-side up on a flat surface (it may be kept in the leather case that it comes with to protect from dust). Its stops working when picked up and restarts once placed again. Once in place, it works indefinitely as long as it is not disturbed or broken. Small chips on the sides will not matter as long as symbol remains in tact. It requires no energetic or physical maintenance as the symbol is self-clearing (only dusting from time to time if not kept in the case).

History of the Symbol

The symbol of Atlantis was discovered at the end of the 19th century by Marquis d’Argain, the French Egyptologist. In the King’s Valley of Luxor, he unearthed a ring made of clay with a symbol on it which was unknown to him. However, the symbol did not receive great attention until Howard Carter (the organiser and the leader of the expedition) began to open King Tut’s tomb and wore the ring repeatedly while excavating the tomb. Carter was the only member of the team who was not stricken with a premature or suspicious death. Many believed the deaths were caused by a curse inherited by those who disturbed the Pharoah’s peace.

After Carter’s death in 1939 the ring was passed onto Andre de Belizal, who was an exceptional Dowser, Egyptologist and pioneer in the field of shape waves, who inherited the ring and discovered its exceptional properties. Consequently, de Belizal believed the ring provided a protective shield to the wearer from detrimental radiation and negative vibrations.

A powerful orgonite pendant that enhances the body’s own auric field and shields against strong electromagnetic frequencies.

Lifespace works to harmonise your energy field with the earth and the cosmos, as well as protecting your home against EMFs/Electrosmog.

Protection against electromagnetic radiation while traveling or outside the home.

This pyramid will absorb all negative energy that comes into your space, transforming it into postive and balanced energy.

This powerful Orgone HHG will neutralise negative energy at home, in the car or in the office.

Use this powerful Tower Buster to access ancient knowledge and connect with your higher self.