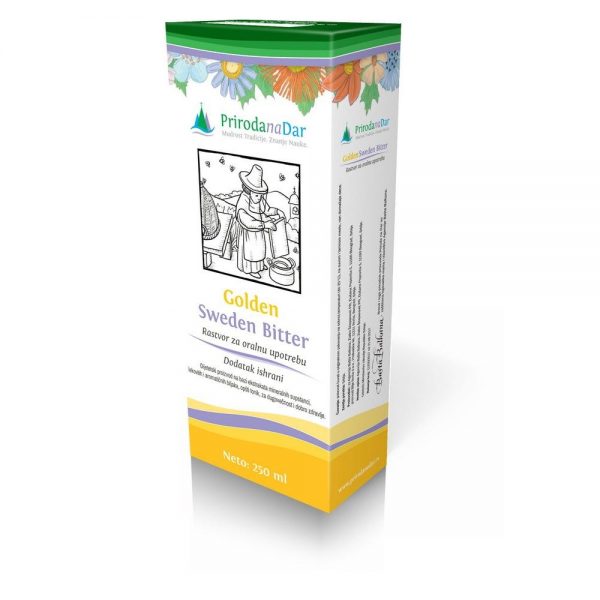 Product Availability: Out of stock

The Original Sweden Bitter with teriyaki, saffron, clay, ash, wine and other medicinal plants made according to the original Dr Paracelsus formula.

Golden Sweden bitter is the name for Elixir ad vitam longam which is also known as Swedish mustard, ie Swedish twig, Swedish tonic, Swedish bitter (Swedish bitterness), Schwedenbitter, Schwedenkrauter. For a long time, there are various items on the market that are all called Original Sweden bitter. However, it should be understood that there are two elixirs, very similar but still different, which are called the same but are made differently and act differently – these are the Little and the Great Swede Biter. The greatest credit for their popularity is due to the Austrian herbalist and naturopath Maria Treben, who used and treated the version of the tonic known as the Little Swedish Bitter, because even then and now it was very difficult to get all the expensive ingredients for the Big Swedish Bitter.

Swede bitters or Swedish sprig is a combination of tinctures of medicinal herbs and teriyas (an ancient resin remedy). In modern times, terriac has been removed from the elixir which leaves a very strange herbal version of an ancient medicine (powdered herbs). The original Teriac is a resin, which if well made has valuable medicinal properties. The lack of real teriyara in all the versions of Sweden bitters we encountered and tried, as well as the standard way in which the elixir is made today, eventually led us to go back to tradition and make the Great Swede bitters ourselves, using the original Medieval Paracelsus formula, called the Golden Sweden bitter – Elixir ad vitam longam .

This is a powerful elixir of health and longevity. We make the Big Elixir for longevity in small batches because the production process is complicated, expensive and slow unlike the Little Sweden Bitter, which is easy to make and sells everywhere at low prices. Swedish twig on file The old manuscript of Dr Samst reportedly cures as many as 46 illnesses by Mary Treben. It is an elixir for longevity, immunity, stimulation and stimulation.

“Health and fitness will be maintained to a profound old age if a small spoonful of bitter, with a little water or herbal tea is drunk three times a day, morning, noon and evening,” – quotes Mary Treben from Health from God’s Pharmacy.

A powerful blend of herbs that is a corrective food for the intestinal tract, designed to encourage the elimination of waste.